If someone had told me when I was younger that I would actually enjoy being awake before dawn, I would have laughed.  But over the years I have developed the habit of waking up with the sun.   And since we turned the clocks forward in anticipation of the Spring Equinox on March 20th,  I’ve been up  just in time to witness the rising sun as it paints the eastern sky with watercolor shades of pink and yellow; everything looks so new and fresh in the muted light of dawn and life is just beginning to stir in the dark recesses of the woods.

So as I shake the sleep from my head and wait for the coffee to brew, I peek out from between the drapes on the sliding glass window to see if I can catch an unwary deer or bird going about their own early morning routines. I learned from experience that if I just throw the curtains open, any creature that might be out there will immediately spot the sudden movement and flee to anywhere but here.  So when I took a peek out of my ‘blind’ this morning, I was delighted to find a group of ten yellow-shafted flickers in the grass not more than three feet away, diligently working over the lawn for ants and other insects. They showed no indication that I had given myself away.

Yellow-shafted Flickers (Colaptes auratus), also known as Northern Flickers, are not an uncommon sight here in the Ozarks, but to see a large group of them like this is a lucky find. Flickers are migratory birds that spend the hottest parts of summer in the northern states. During the winter and throughout the breeding season, they can be found all over the south and southeast.

Outside of breeding season, flickers tend to stay in pairs or very small family groups and will often join up with large flocks of smaller birds like chickadees and nuthatches. I recently read that flickers are steadily declining in numbers due to a lack of suitable nesting habitats exacerbated by aggressive non-native species such as starlings, which compete for similar food and nesting sites.

Both male and female flickers are roughly 14” long and have an average wingspan of 21” from wing tip to wing tip.  Flickers are typical of other woodpeckers in their nesting and diet preferences, but tend to spend most of their time feeding on the ground rather than in the trees.

Unlike other woodpeckers, flickers have a look that is all their own. A flicker’s face is a creamy buff-tan color crowned by a cherty-gray cap. On the back of the neck is a bright red, crescent-shaped mark. The male can be told from the female by a black mustache on either side of the beak.

Both sexes have a buff-tan body boldly adorned with irregularly shaped black dots. The breast is splotched on the breast, flanks and back while the wings and outer tail feathers are emblazoned by wavy, undulating black bars.

The dull outer coloration of flickers helps to protect them as they forage on the ground, but they also have a more colorful side; lining the undersides of their wings and tail are surprisingly bright, lemon-yellow feathers that are usually only seen in flight. What strikes me about the band of flickers here this morning is that all of the birds in this group are male. As I watch, I am privileged to see how their bright-yellow feathers are used to their advantage.

As the all-male band peacefully works over the grass, a new male boldly swoops in from the woods.  His abrupt arrival prompts one of the already present males to charge the newcomer. Stopping just short of physical contact, he quickly turned his body sideways and fanned out both wings and tail feathers so that the new arrival could appreciate the bold yellow undersides.

He kept up this shake and shudder while steadily advancing on the new male. The outsider was clearly impressed by the show and quickly backed away. He was obviously being shown who was boss in this flock and once the message was received loud and clear, the entire group, including the newcomer, went back to foraging without further incident. The whole event took less than thirty seconds.

The feather-shaking ritual occurred twice more during the forty or so minutes that I watched the flock and both times things settled without incident. I couldn’t help being reminded of the dancers at the many pow wow’s that Dean and I attended while living on the Flathead Indian Reservation in Montana.

The way the flicker spread his feathers and turned his body to show off his colors reminded me of the male dancers in the center of the ring, shaking their feather fans as they elegantly stepped and whirled to the rhythmic beat of the drums. Their shining feathers telling a story. By the time the flickers had moved on to other dancing grounds, my mind was wonderfully alive and ready for the day to come.

© Jill Henderson – Feel free to share with a link back to this site. 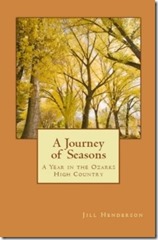 If you liked this story, check out my book,
A Journey of Seasons
A Year in the Ozarks High Country

Set in the rugged heart of the Ozark mountains, A Journey of Seasons is memoir, back-to-the-land handbook and nature guide rolled into one.  Henderson’s 20-years of living off the land and foraging in the wilderness shines in this cyclopedic work filled with nature notes, botanical musings, back-woods wisdom and just a pinch of “hillbilly” humor.  This is one journey you don’t want to miss.