Why Save Seed? GMO’s and Your Garden

Last week we discussed some of the more obvious reasons for saving your own seed: to be more self-sufficient and save money, to adapt varieties to the local environment, and to increase genetic diversity in food crops.  But, of course, I can’t talk about saving seeds without discussing Genetically Modified Organisms, (GMO’s) otherwise known as Franken-food.

I think by now most Americans have a general understanding of what GMO’s are, but just so we’re all on the same page, let me give you a quick definition. GMO’s are organisms (in this case, food crops) that have had their natural genetic structure altered by literally forcing the genes of unrelated plants, animals, insects, fungi, bacteria, viruses and even human genes into the host plant’s embryonic cells using a virus as a vector to infect the host and spread the new gene.

Now, I don’t know what your spiritual beliefs are, but I don’t believe the Creator ever intended for rice and mice to splice. This is the way we have bred and developed crops for thousands of years. Spirituality aside, there are serious concerns as to how these genetically modified foods act upon the human and animal body when consumed over a long period of time.

Many people believe that it is the job of the Food and Drug Administration (FDA) to protect consumers from the potential dangers that might come from eating or growing GMO’s and the Department of Agriculture and the Department of Environmental Safety to make sure they don’t pose a threat to other life forms. But those beliefs are abused in such a way as to give the general public a false sense of security.

In fact, the FDA has never conducted a single study on the safety of consuming or growing GMO’s. Instead, they rely solely on information supplied to them from the purveyors of false science and lobbyists paid for by Monsanto, Syngenta, DuPont and other biotech/chemical companies whose sole interest is not to “feed the world”, as their PR touts claim, but to make money for themselves and their shareholders.

There are, however, more than just a few independent studies that have proven beyond a shadow of a doubt that not only do GMO’s not produce more food than conventionally bred crops, but that the physical effects of consuming them have disastrous consequences for both human and animal subjects.

If the health and well-being of human lives do not stir the general populace to reject GMO’s outright, perhaps the loss of their ability to grow and save the seed from non-GMO food crops – including those in their very own gardens – will.

We are swiftly entering the point of no-return when it comes to protecting ourselves from worldwide GMO contamination. And once Pandora’s box has been opened, there will be no going back.

It is exactly this principle that drives the biotech industry to do what they are doing at this very moment, which is buying up small seed companies, genetically modifying as many food crops as possible, as fast as possible, and patenting plant varieties that you and I generally consider “heirloom” varieties that have and always should belong to the people of the world.

Even the casual seed saver understands the concept of pollination, which is the natural movement of pollen from one plant to another in order to produce fruit and seed.  And even though GMO’s are not “natural” in any reasonable sense of the term, that does not stop them from passing their Franken-genes on to other, non-Franken-food crops – like the sweet corn or beets or edamame in your very own vegetable garden – through the pollination process.

A fact that the biotech giants have known about from the very beginning.

Way back in 1998, scientists at the University of Chicago were experimenting with genetically modifying a variety of mustard to be herbicide resistant. And although no known gene effecting floral characteristics was altered, the workers noticed that the genetically modified flowers looked a little different from those on the un-altered plants. Though the scientists thought this change was unlikely to be significant, they decided to test the modified plants’ out-crossing rates, or the rate at which pollen successfully pollinates a female flower to produce viable seed in comparison to the non-altered plants.

It turned out that the genetically engineered mustard had over 20 times the out crossing rate of the standard mustard. In short, the pollen from the genetically engineered mustard was over 20 times more likely to successfully reproduce than its natural counterpart growing right next to it! This disturbing fact spells disaster for non-GMO crops grown in the same region as open pollinated and organic crops, and its outcome has already been felt by farmers all over the Midwest.

Over the last 16 years, the number and varieties of commercial GMO crops have exploded. It’s not just flour corn and soy, but wheat, rice, beets, squash, papaya, apples, tomatoes and many other common food crops.  And even if you don’t start out growing GMO veggies and fruits, if you live anywhere near where they are being grown, there is a real threat of contamination through the pollination process.

What’s more dangerous is that crop farmers and backyard gardeners alike have no recourse to GMO contamination.  It has gotten so bad that even Jere Gettle, founder of Baker Creek Heirloom Seed Company has said that it has become almost impossible to find corn seed that has not been contaminated with GMO’s anywhere in the world.

Even if you have a moral opposition to GMO’s, you are probably eating them right now because they are found in almost every type of pre-packaged food, spice blends, gravy packs, flours, baby food, and on and on.  It’s gotten so pervasive that organic standards now allow for small percentages of GMO contamination in certain products.

I don’t want to dis-courage you with all this bad news. I want to en-courage you to fight back! Demand labeling of all GMO products in the US and boycott all businesses who fight against labeling our food. It is our right as consumers to know what is in the food we grow and in the food we buy.

And if you love to garden then it is time to learn to save seed.  For these big chemical and biotech corporations are also buying up garden seed companies in droves, hoping that one day – perhaps even right this very moment – they can start slipping in seeds of genetically  modified garden crops without you ever being the wiser.

Start by buying your seed ONLY from companies that have taken the Safe Seed Pledge, try to buy organic seed whenever possible, and demand that the seed company you buy from disclose their affiliations with biotech firms such as Monsanto and their garden seed brands Seminis and DeRuiter, which sell seeds

to other seed companies not owned by Monsanto.

By learning to save even a few varieties of seed, you not only help yourself, but you also help people around the world by boycotting GMO’s and preserving the genetic diversity of one of the world’s most precious resources.

If you liked this article, check out Part I in this series:
Why Save Seed? Selection & Genetic Diversity

© 2015 Jill Henderson  Feel free to share with a link back to the original article.

Non-GMO Project: Agricultural Crops That Have a Risk of Being GMO
http://www.nongmoproject.org/learn-more/what-is-gmo/ 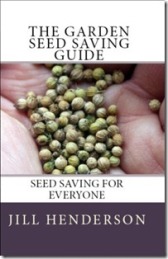 Save money, become more self-sufficient and avoid GMO’s by saving seeds!  This excellent resource for beginning and hobby seed savers takes you step-by-step through every aspect of saving your own seed in plain English.

Like Loading...
This entry was posted in Organic Gardening, Seed Saving and tagged cross pollination, dangers of, gardening, GMO, how to stop, jill henderson, preventing GMO contamination, save seed, show me oz, The Garden Seed Saving Guide. Bookmark the permalink.

16 responses to “Why Save Seed? GMO’s and Your Garden”