Why Save Seed? Patents in the Garden

Another issue related to GMO’s is the patenting of life forms by the grain giants and the pharmaceutical industry. Make no mistake – the money to be made on the ownership of genetic patents is staggering. That’s why the big agriculture, chemical and pharma-giants like Cargill, Monsanto, Syngenta and DuPont are racing to patent plant genes – and not just the GMO’s they create, but all plants with any value – like the vegetable crops that you and I grow in our gardens.

Imagine this scenario: all the plants in your garden are literally owned by a few multi-national corporations. You must not only buy their seed, but you may have to pay for the right to grow it. And if you save seed or propagate the plants vegetatively, you may find yourself face to face with a lawsuit and a very real threat of going to jail for patent infringement. I’m not just talking about seeds from plants that these companies worked years to develop – I’m talking about old varieties that have been around for 50, 100, or even thousands of years! You can just see the dollar signs swirling, can’t you?

The very real threat here is that, in the near future, we may not have the right to save our own seeds because some big corporate giant will own the rights to them. This frightening scenario is taking place all over the world this very minute. An early example of corporate biopiracy involved the patenting of the neem tree, which is a member of the mahogany family of trees and indigenous to the Indian subcontinent and widely cultivated in various countries throughout Africa, Central and South America, Asia, and the Caribbean Islands.

According to a TED Case Study entitled, The Neem Tree, Environment, Culture and Intellectual Property, the medicinal, insecticidal, and utilitarian properties of neem were first documented 2,000 years ago in ancient Sanskrit texts that extolled its virtues as “a cure for ailing soil, plants and livestock.” But the usefulness of neem, as determined by the people living in these regions, is extensive and deeply cultural.

The West knows neem best as an effective insecticidal agent effective on more than 200 destructive crop pests and does not harm non-chewing insects or the environment.  The leaves of neem are fed to livestock, but Some other uses include the treatment of a wide array of injury and illnesses, including leprosy, ulcers, diabetes, skin disorders, hypertension, general inflammation, infections, kidney stones, and as a potent spermicide.  Neem oil has been used as lamp oil and added to toothpaste and soaps and the raw twigs are used as effective natural toothbrushes. The wood of neem is also very hard and dense and has been used for fuel and as termite-resistant lumber for homes, fine furniture, and various novelty items.

The TED report goes on to point out that “Neem based pesticides, medicines and cosmetics have been produced by some laboratories in India, but there has not been an attempt to make ownership of the formula legal because Indian law does not allow agricultural and medicinal products to be patented.”

In 1971, the owner of a timber company in the U.S. learned of the value of neem and began germinating neem seeds and growing the trees for pesticide production. Eventually, he applied for and received a patent on the insecticide and in 1988, sold the patent to W.R. Grace.  In 1992, W.R. Grace secured the rights to the pesticide formula and began suing Indian companies for patent infringement.

The people denounced the patent, but got nowhere in fighting it until Vandana Shiva, a champion for working class people all over the world, stood up to the corporate strong-arm tactics used to intimidate and subdue any resistance to their plans.  Shiva helped the Indian people stand up against this corporate bio-piracy, claiming indigenous rights to the use of the tree.

After a long and arduous battle, the people finally won their suite against the American company, but only in India. This scenario is played out over and over again all over the world. Sometimes the people win, but more and more often, they lose.

All one has to do to witness the loss of cultural heritage right here in the United States  is to look into the current trend to patent heirloom garden vegetable varieties by simply changing a tiny fragment of the heirloom’s DNA. This will lead to confusion among consumers and unintentional patent infringement by gardeners and seed savers who do not understand Utility Patents and Plant Variety Protection laws. 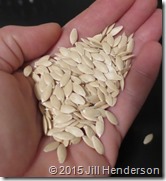 The big question is, when will this plant-grab come home to roost and how do we protect ourselves right now?

First of all, by saving and growing our own seed, we are essentially asserting our cultural and indigenous rights of collective ownership. The people of India won their lawsuit against bio-piracy in part because they could show that they already “owned” the the neem tree and all products made from it because they were the ones who had discovered it, grown it, and developed its uses over thousands of years.  And if we are going to protect our long and diverse agricultural heritage from bio-pirates, we must grow and save the seed of heirloom open-pollinated fruits, herbs and vegetables – before it’s too late.

© 2014 Jill Henderson  Feel free to share with a link back to the original article.

Save money, become more self-sufficient and avoid GMO’s by saving seeds!  This excellent resource for beginning and hobby seed savers takes you step-by-step through every aspect of saving your own seed in plain English.

Suggested Reading from Show Me Oz