In last week’s article, America’s Native Bamboo: History and Ecology, we learned that America was once home to massive colonies of native bamboo, better known as canebrakes. These lush cane forests played a critical role in the ecology of the regions they inhabited by filtering sediments, controlling erosion and providing food and shelter for many native animal and bird species. Cane also played an important role in the lives of the earliest inhabitants who valued it as a nutritional food plant and an important material used to fashion tools, weapons and lodging. In the early days of settlement, America’s native cane fields were first used to fatten cattle and then cleared for farmland. Today, a whopping 98% of America’s once-abundant native bamboo has been extirpated from the landscape. This week, I will discuss the ways in which native bamboos are being used in restoration projects and how we can help return them to their rightful place in nature and beautify the home landscape, all at the same time.

River Cane (Arundinaria gigantea), Switch Cane (Arundinaria tecta) and Hill Cane (Arundinaria appalachiana) all belong to the Poaceae, or Grass family of plants. Although they are referred to as “cane”, they are true bamboos closely related to those found in Asia and parts of South America. While there has been some confusion as to whether or not River Cane and Switch Cane are one and the same species, recent work has proven without a doubt that the genus Arundinaria includes three separate and distinct species, which together are the only temperate native species of bamboo found in the Northern Hemisphere. 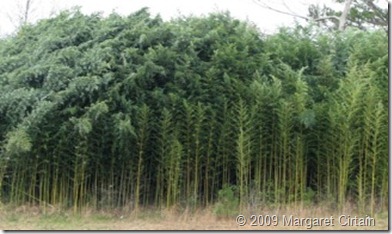 Today, most of the “wild” stands of bamboo seen along roadways are probably not native cane, but rather, landscape renegades with Asian origins.  According to Margaret C. Cirtain from the Department of Biological Sciences at the University of South Carolina, the most common and aggressive species of non-native bamboo found in the wild is Golden Bamboo (Phyllostachys aurea) also known as Yellow- or Fishpole Bamboo. Her article, entitled Identifying Native Bamboos, is an excellent resource for anyone interested in identifying native and non-native bamboo species.

America’s native bamboos were originally found growing in various parts of the southeastern United States states, depending on the species: from Texas, Oklahoma and Kansas on the western edge, along the southern boundaries of the Great Lakes north and east to New York, and south along the coastal region to southern Florida and every state in between.

River Cane, the largest and most notable of the three native species, is a lowland species that prefers growing on the banks and deltas of large rivers and their tributaries. Switch Cane and Hill Cane, more diminutive than River Cane, prefer conditions found in the southern states and prefer drier, partly shaded woodland settings.

Restoration of native bamboos are current underway in many states, including Missouri. The Nature Conservancy has three restoration areas in Missouri along the Current River where visitors can see the benefits of native bamboo in action. Those areas include ): Chilton Creek, Thorny Mountain and Shut-in Mountain Fens. Click on the individual links to find more information on these sites. All are open to low-impact recreational activities including bird watching and hiking.

For the home gardener, growing native bamboos can be a fun and rewarding experience. Native bamboos are not only beautiful, they are functional and environmentally sound, as well. Native species of bamboo are play host to many endemic species of birds, butterflies, bees and wasps, who use stands of bamboo for food and shelter. Native bamboo can be used as privacy screens, shade-creators, windbreaks and erosion control.

Like all true bamboos, native species spread via an underground system of segmented rhizomes from which their roots grow. All bamboos are also classified as either “clumpers” or “runners”. Clumping bamboo tends to grow outward in a circular fashion, rarely moving far beyond it’s original planting hole. Runners, on the other hand, tend to spread in all directions, often creating dense screens or stands. Although all of our native species are considered runners, I have been told that River Cane is the most aggressive of the three, especially when it is grown in rich, moist, loamy soils – the most ideal of conditions for this particular plant. Planting native cane in heavy soils, or in areas that are excessively dry or sunny, can naturally curtail their growth and hence, their wandering habits.

In general, native bamboos are heat and cold tolerant perennials that prefer rich, consistently moist and slightly acidic soils with a pH of 6-6.5. All but Hill Cane are evergreen. River Cane is the largest of the three, reaching heights of River Cane 6-30 feet and spreading as far as is allowed by soil and water conditions. When mature, River Cane can tolerate periods of running or standing water and full sun. Switch Cane grows to heights of approximately 6 feet at maturity when grown in excellent conditions, which includes consistently moist soils (as found at seeps and along streams) and shade generated by large trees such as pines and oaks. Hill Cane grows to approximately 6 feet and prefers to grow in the shade of mature trees on well-drained slopes or swales, especially common around seeps and springs in its native habitat. Switch Cane is the only deciduous native bamboo.

The biggest problems with growing native bamboos are the availability of local sources of nursery plants and the length of time it takes plants to reach maturity. On several occasions I have been advised by amateurs to dig up specimens from public land. However, doing so is not only illegal in most places, but also degrades the quality and size of natural stands. Obtain 2-3 year old nursery-grown plants from reputable dealers in or order plants online and keep in mind that even with 2-3 year potted plants, it may take an additional 2-3 years before your native bamboo becomes established in its new location. Whatever you do, don’t ever buy bamboo “seed” – bamboo rarely blooms and it is probably a hoax.

Should you have a private, identifiable source of true native bamboo, or are interested in dividing specimens you already have, take care to dig them very carefully. Take only clumps that include a large portion of culms, rhizomes and roots while still retaining as much natural soil around them as possible. Transplanting is best undertaken in late winter or early spring.

Plant rhizomes in a hole at least twice as deep and wide as the clump and back fill with high-quality loamy soil. If only native soil is available, adding lots of shredded organic material at planting time is advised.  Like irises, the rhizomes of bamboo must be completely covered with a few inches of soil, but do not bury them too deeply.

As the bamboo matures, spent leaves will fall and accumulate around the base of the plants. These leaves are the perfect mulch, containing high levels of silica and other chemicals that the plants recycle into nutrients they need to grow. Until this occurs naturally, take steps to provide young plants with 2” of organic mulch. This will help keep the soil consistently cool in summer and prevent freezing in winter. Because bamboo is related to grass – and all grasses contain high levels of nitrogen and silica – any kind of grass makes excellent mulch for bamboo. Otherwise, hay, wood chips or leaves all work well.

In addition to mulching, young plants may need to be shaded from the hot summer in order to prevent scorching. They will also need regular, deep watering to ensure good growth. This is especially true in the early period after transplanting and on very hot or windy days. Although mature River Cane can tolerate periods of inundation by water, none of the three native species ever grow in standing water and young plants that are watered too much suffer as much as those not watered enough. Keep the soil moist, but not soggy.

If you are concerned about your bamboo spreading out of control, consider planting them in areas where natural barriers occur, such as along driveways, roadways and foundations. Planting bamboo within an area of lawn can also be helpful, as regular mowing will prevent rhizomes from spreading out-of-bounds.

Another alternative is to use impenetrable barriers made specifically for bamboo at planting time. Visit any nursery that specializes in bamboo for more information. If you don’t have naturally loose soil in the area in which you are planting, avoid creating a deep bed of loamy soil at planting time. Keeping the relatively hard native soil beneath can help stop the rhizomes from “ducking under” any barrier you put in its way.  Bamboo Garden’s website  has a lot of useful information on planting and containing bamboo.

Once your native bamboo is mature, you can selectively harvest canes for any use you desire. The shoots of all three native bamboo species are delicious, having a crunchy texture and a taste akin to raw sweet corn. They’re also quite nutritious and low in fat and calories. According to a brochure published by the Cooperative Extension Service at Washington State University, one cup of bamboo shoots is reported to contain approximately 14 calories and half a gram of fat. They are also high in fiber and a good source of heart-healthy potassium (640 mg per 1 cup serving). Fresh bamboo shoots also contain healthy phytochemicals that have antioxidant, antimutagenic, antiviral, antibacterial and antiviral actions.  They also include lignan – a natural phytoestrogen – and phenolic acids, which are known to be powerful antioxidants and anti-inflammatories. Click on the link above to read more about harvesting and using fresh bamboo shoots.

No matter how you look at it, America’s native bamboo is as important and valuable today as it was over 400 years ago. It is an important natural and cultural resource that Americans should employ, both in the home landscape and in the wild. By avoiding exotic Asian cultivars and planting only America’s native bamboo species, we do ourselves and our history a great service.

© Jill Henderson  Feel free to share with a link back to the original article.

Filled to the brim with colorful stories, wild walks, botanical musings, and a just a pinch of “hillbilly” humor A personal and inspiring tale of homesteading in the Ozark backwoods by noted author, naturalist and plant organic gardener, Jill Henderson.