Otters in the Ozarks

When Henry Rowe Schoolcraft first entered the Ozarks in 1818, he found the area lightly populated by settlers whose livelihoods included hunting, trapping and timber. At that time, the Ozarks were still a secret wilderness overflowing with thick virgin timber and teaming with wildlife.  But it wouldn’t be long before prospectors began to cash-in on the abundance of the land, and a great assault on the precious resources of the Ozarks began.

By 1890, the entire region had been almost completely stripped of timber, while the remnants that remained were repeatedly ravished by wildfire. Game animals became scarce as bush-meat hunters moved in to the area to feed growing populations in the north.  In a very short time, many species of wild animals had been exterminated from the Ozarks, including beaver, mink, elk, rabbit, quail, grouse, mountain lion, black bear and wolves.  As recently as 1952, deer were a rare sight across the Ozarks and wild turkey and otter were all but extinct.  Many an Ozarker had grown to adulthood without ever having seen these animals.

A 1970 census found fewer than 70 otters in the entire state, with the majority concentrated in the swampy Bootheel region. After the successful reintroduction of the wild turkey in 1952, conservationists turned an eye towards reintroducing additional species, such as the otter.

The first river otters to be reintroduced in Missouri came from Louisiana. The Missouri Department of Conservation released a handful of radio-collared otters in 1982 and over the next 11 years a total of 845 otters were released. Since then, their populations have exploded.

River otters can reach lengths of 30”, excluding their tails, which can add up to a foot and a half more to their overall size. Their sleek, mahogany-colored fur is adapted to shed water easily and allows them to

move through the water with little friction. Otters are playful, social mammals with super-high energy levels. To maintain this level of activity, they relentlessly search for food like fish, frogs, crustaceans, small birds and rodents. If the opportunity arises, they will kill and eat an animal as big as a rabbit. One key to the otter’s hunting prowess might lie in their human-like hands. The tracks of river otter show five long fingers splayed out wide, with the toe on the back foot sticking out to one side like a human thumb. This thumb is used to grasp things, such as prey, tightly.

The reintroduction of otters to the Ozarks was much more successful than anyone had hoped.  Armed with a strong, gregarious nature and a keen ability to hunt, otters are occasionally driven to destructive behavior. Since reintroduction, there have been numerous reports of otters ransacking farm ponds where they first consumed large numbers of fish and then left many times more lying dead on the banks. To some, it appeared as if the otters had made a game of catching fish that, confined to the limits of the pond banks, could not possibly escape them.

Of course, this kind of behavior from such a newly reintroduced species angered those who spent a great deal of time and money stocking ponds with fish, only to have them left lying about the banks to rot by a wily otter.  While no one condones this behavior, it is a clear indication that otters have succeeded in increasing their numbers and territory. In fact, the otter’s reproductive tenacity was the driving force behind the opening of the annual trapping season for otter in 1996.

Being social creatures, otters prefer to live in large family groups where they use their huge vocabulary of squeaks, chirps, purrs, grunts, barks, screams, growls, hisses and squeals to communicate with one another. They spend much of their time frolicking in the water and playing along steep stream banks.

Sure signs of otter habitation include well-worn paths and slides.  Slides are smooth, slick depressions created on sloped embankments or snow.  Slides almost always terminate in a body of water.  When sliding, an otter will dive head first onto the chute, tucking its front legs tightly against its body to decrease friction.  The more the slide is used, the slicker and faster it becomes.  Like humans, otters enjoy sliding. In fact, it appears to be one of their favorite pastimes. While obviously a lot of fun, slides serve as a method of escaping land-based predators and other danger.

Despite their potential as a destructive force in heavily populated areas, river otters belong in the Ozarks. Their presence is an important piece of the biological puzzle that improves the health of the ecosystem as a whole. While we don’t often consider the ways in which otters impact 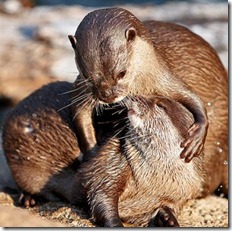 our world, humans benefit by their presence. Besides, what would a float down a clear Missouri river be without enjoying the sight of at least one of these beautiful and fearless survivors?  It is heart-warming to know that the destructive practices of the past can and are being turned on their heel.  The return of otters to their natural state puts one small piece of the larger puzzle back where it rightfully belongs.

Like Loading...
This entry was posted in Nature Notes, The Ozarks and tagged A Journey of Seasons, about, conservation, jill henderson, missouri, ozarks, reintroduction, river otter, show me oz, wildlife. Bookmark the permalink.

6 responses to “Otters in the Ozarks”