Alien Invaders: Armadillos in the Midwest 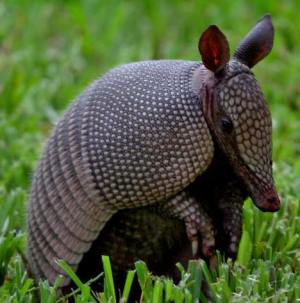 Many people who don’t live in the Ozarks are surprised to learn that there are armadillos here. This is obviously because most people do not associate these odd animals with the mid-south, but rather think of them as creatures from such dry states as Texas, New Mexico and Arizona.  While I never thought much about armadillos before I came here, I have come to learn the hard way that they are both an intriguing and terribly frustrating creature.  And while I am a self-avowed animal lover, I must admit that my frustration with this scaly critter has occasionally reached murderous proportions.

Out in the garden early one morning, I find yet another round of nighttime shenanigans by our resident armadillo.  “Fat”, as we’ve come to call him, has once again dug numerous holes throughout the beds.  I curse under my breath as I repair the damage and replace the mulch around the young plants.  Yet, I have to stop myself from thoughts of murder, for Fat hasn’t actually uprooted anything in my garden.  In fact, every single “dig” is between the plants.  I scratch my head in wonder.

Armadillos are definitely a strange kind of creature and one that isn’t native to these Ozark hills.  Distantly related to anteaters and sloths, armadillos are native to South and Central America, where twenty different species exist.  Here in the US, only the Nine-Banded Armadillo (Dasypus novemcinctus) is a permanent resident.

Armadillo in Spanish means “little armored one” due to the bony plates that cover its legs, head and body.  These plates are not just bony, the are actually made of bone!  The nine-banded species is so named for the nine, flexible bands across the midsection, which allows it to be relatively nimble.

And while they can definitely be a nuisance, armadillos are also pretty incredible animals that have evolved with some very unusual and creative methods of survival, including the ability to dig quickly and deeply to evade predators.  Because armadillos only have a few small stubby teeth and a long probing tongue like an anteater, they generally eat soft-bodied insects, earthworms and grubs.  However, if the occasion arises, armadillos will also eat small snakes, lizards and occasionally carrion.

To scientists, of the most fascinating things about armadillos are their reproductive abilities.  Female armadillos bear exactly four, genetically identical quadruplets of the same sex.  In fact, each of the four young originate from the same egg and share the same placenta – no other mammal on earth can do that.

Surprisingly enough, armadillos also like to swim.  By taking in large amounts of air into their lungs to make them more buoyant, they can easily dogpaddle for some distance.  If that doesn’t strike you as odd, what may is the fact that when these bulky, armor-plated desert dwellers are faced with a body of water they actually prefer to walk across the bottom while holding their breath, which they can do for up to six minutes.

Of course, it is common to see armadillos lying dead on the side of the road – where they seem to remain almost completely intact for months on end – but it isn’t because they aren’t fast enough, it’s because they don’t see very well and have a tendency to jump straight up – sometimes as high as four feet – when startled.  Jumping is a good thing to do to evade predators, but not such a good thing to do in front of or underneath a moving vehicle.

In fact, armadillos have such poor eyesight that they often walk right by and sometimes directly into people, dogs and other predators, completely unaware of their presence.  But once alerted to danger an armadillo can move surprisingly fast, and when necessary, defend itself with dangerously sharp claws. 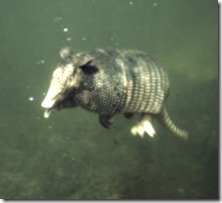 While normally docile, armadillos manage to strike fear into some people.  This is because armadillos, humans and three types of primates are the only creatures in the world that can contract and spread leprosy – a bacterial infection also known as Hansen’s disease.

According to an article in Science Magazine, in some places up to 20% of the armadillo population carries leprosy, but that infection of humans by armadillos is “miniscule”.  The article states that of the 150 people diagnosed with leprosy in the US each year, only 30 to 50 of those are thought to have contracted the disease from armadillos.

Although this particular article states that leprosy can be transmitted via blood or undercooked armadillo meat, every other source I found contends that leprosy is only transmitted through close contact with nasal discharge and possibly, though unproven, through contact with areas of infected skin.  It is worth noting that 95% of humans are naturally immune to the disease and leprosy is easily and effectively treatable with common antibiotics.

Because armadillos are primarily nocturnal animals, we seldom see Fat at his treachery in the garden.  But each time I wake to discover his nighttime rampages, I curse him to the wind and proclaim my intent to introduce him to our rifle.  But Dean continually reminds me that even as he digs, Fat is eating tons of destructive insects and grubs, particularly those of Japanese Beetles.  The holes that he digs may be frustrating, but in the end Fat is doing us a service – even if we don’t always appreciate it.

Although Fat remains unrepentant in his ways, we have come to accept his handiwork and see him as something more than just an annoyance.  And although  I like to rant and rave about doing him in, I never seem to get around to it – I guess it keeps us both on our toes.

Set in the rugged heart of the Missouri Ozarks, A Journey of Seasons is a beautifully recounted memoir filled with nature notes, botanical musings, back-woods wisdom and just a pinch of “hillbilly” humor by author, naturalist and organic gardener, Jill Henderson.

20 responses to “Alien Invaders: Armadillos in the Midwest”